You Really Did Help Me 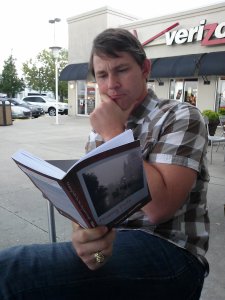 I knew something Pastor Jeff didn’t know when he met me at Starbucks. He really did help me, but not in his way, in God’s.  More than ten years earlier, Jeff had been hired to be the worship leader at my church. Before he arrived to assume his new position, my husband and I had left the church. The coming and going was all in God’s perfect timing, but I didn’t know that. I didn’t want to leave the church, and at the same time felt our departure was long overdue. Attendance there had become a love hate relationship. I loved the people and teaching my Sunday school class but hated the war zone the church had become.

With lots of time and not much to do, I slipped into depression. I had started writing while teaching Sunday school. In a quest to dig my way out of darkness, I began writing again. I didn’t want to write. Writing kept me sane. My choice was clear. Write or sit in a mental ward banging my head on a wall. I ended up published, but not by intent. At every turn, I found reason to cast the manuscript on a shelf convinced I had come to the end of the publishing road.

Three years later, Jeff was elected as the new pastor, and the church my husband and I attended had permanently closed its doors. With no place to go and a new pastor at the helm, I pushed my husband to return. We were not in agreement. I loved teaching my Sunday school class and thought I could pick up where I left off. My husband relented to my desire when he saw that, unlike the previous pastor, Jeff was supportive.

The church had been reduced to a stump, and the Sunday school department closed by the time we returned. I requested to start a Women’s Ministry. Pastor Jeff encouraged me in word and in deed. We started strong with twenty ladies at the first meeting. Even though things were going well, I knew in the depths of my heart, later confirmed by a series of events, that this was not God’s place for me. Another woman felt I had laid a foundation she could build on and I resigned.

I started a drama team. A friend who writes plays helped me write the skits for the team to perform. Unwittingly, I had returned to the very thing I did not want to do. Write. I was ecstatic when Pastor Jeff announced the church was implementing Sunday school again. My joy was but for a moment. Before he finished making the announcement, I knew Sunday school was not my place, and God would give me no part in it. Instead, my return to writing led to the revelation that I had a book published. Jeff offered to help me.

I sat in his office with prepared notes, so I did not ramble. He listened patiently as I explained how I had started writing and the events that led to a published book.I then detailed ways the church could help me with self-publishing. Jeff believed in my talent and offered to bring the matter before the board as a ministry worthy of financial backing.

After the meeting, I called a friend and prayer partner. We prayed God’s will “would be done, as it is in heaven”. I specifically prayed that God would shut the door, if he did not want the church financing a book. When Jeff called with the results of the meeting, he said, “Teena, the door is shut.” He offered an alternate way for me to obtain finances from the church as a missionary. I declined the generous offer. Jeff’s statement confirmed that God had heard my petition, and I didn’t want to kick open a door that God had shut.

It appeared Jeff’s quest to help me had failed, but it didn’t. I had resisted writing for many years when I met with Jeff about his offer to help me. I had returned to a church where I no longer belonged, unwilling to accept that teaching was over. I had walked into his office a reluctant writer. During the conversation, I accepted writing as my lot in life. I exited his office with clarity and purpose. Jeff really did help me, but he didn’t know that until he met me at Starbucks. I owed him a copy of my book because his story, “God’s Family”, is in Finding Faith in the City Care Forgot.