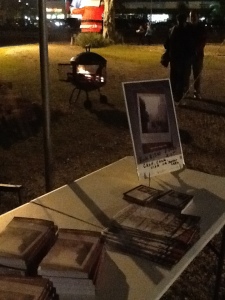 I ‘m taking a break from marketing my book for the rest of the month I wrote in an email to my publicist. Other work is falling behind. I need to get caught up. …Send. I clicked the computer off and went to the bathroom to take a shower.

I walked into the bedroom to dress and noticed a “1” flashing on my phone indicating one message. Play. “Hello, Teena. This is Lisa from Hosanna Church. Would you like to sell your book at Imagine Christmas?”

“People go to Imagine Christmas for the show. You won’t sell any books,” said my husband.

“Probably not, but the event draws a large crowd. It’s a lot of exposure,” I replied. Decisions. Decisions. I already had plans for tomorrow. I called a friend to see if she would man the book table for me on Friday. Not available. I had prayed God would open doors for me to sell the book. Do I turn down an obvious answer to prayer because it’s not convenient? I canceled my plans and called Lisa.

Lisa said they would set up a table for me, but I’ve learned not to depend on what I am told. When organizing an event miscommunications are the norm, not the exception. My son put my table in the car. I added my books and marketing material. Thinking I was finished, I shut the trunk.

Games were being set up in the in the parking lot when I arrived. I drove to the far end of the lot where a few cars were parked and walked into the church. No need to drag my table into the church if they set one up for me. They didn’t. The event coordinator recommended I set up outside in the food tent. Probably not the best place as the sun was setting and the tent dimly lit, but I don’t argue with event coordinators.

I needed the heavy table, so I drove the car to the food tent. A young college student standing nearby came to my rescue when I opened the trunk and the box holding my books fell out spilling books on the ground. I set the table up close to the sound board so I could pilfer electricity if my Ipad battery ran low. Everything was arranged neatly on the table when I noticed the ground was not level and the table slanted. “Please don’t let the books slide off,” I prayed. Then I looked for the money bag. I’d forgotten the bag at home. I can’t sell books without change. Calling my husband to bring the bag wasn’t an option. He had taken our son out to eat. There was no choice but to go home.

A police car blocked the one and only exit out of the parking lot. I stuck my head out of the car window. “Officer, how do we get out?”

“We can’t let cars in or out; too many people in the parking lot. It’s a hazard.”

“Where are people supposed to park that come to the event?” He pointed to a side road. I hastily explained my problem and promised to park on the side road when I returned. Satisfied, he released me from captivity. 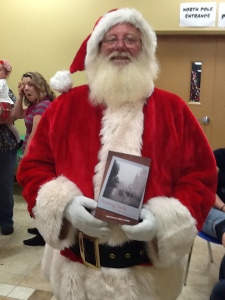 On the way home, I purposed to have a positive attitude. This would work in my favor. I will bring my desk lamp back and light up my table in the dark tent. I return to Hosanna with my change, lamp and glad I’d exchanged my heels for tennis shoes. The parking lot was filled with people. The street I was directed to park on was lined with cars on both sides as far as the eye could see. I found a parking spot and navigated through the throng of children playing on the inflatables provided by Hosanna for the children to play on. I set the lamp on my table in triumph and clicked the switch. The bulb flickered and died.

At this point, I doubted I would sell any books. I appreciated that the pastor at Hosanna had thought of me and included me in the event. The women at the registration table were giving bookmarks to everyone one who registered. The exposure was a measure of consolation as people might buy the book through retail outlets. Then the MC of the Christmas show stopped at my table. “Have you sold any books?”

“No,” I said. “I seldom make sales unless I am allowed to speak about the book or read an excerpt.”

“Are you coming to the show?”

“Yea, most of the people are inside. I may as well.”

The church building was packed; standing room only. Ten minutes before the show began, the MC introduced me and handed me the microphone.

The not so promising beginning ended well. I sold some books, more the second night than the first. Even Santa bought a book.