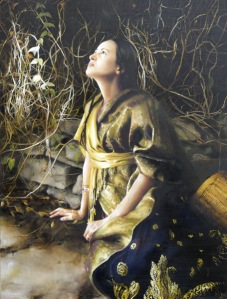 Ten years after Abram and Sarai moved to Canaan, God came to Abram in a vision promising protection and reward. He also made a covenant with Abram to guarantee the fulfilment of his promises. Before the year ended, Sarai and Abram abused a servant in their quest to obtain what God had promised them.

Sarai did not believe she would ever have a baby, so she resorted to an acceptable practice in their day. She used her servant Hagar as a surrogate. Society’s acceptance of a practice does not make it right in God’s eyes. Hagar had no choice but to submit to the desires of the rich and powerful.

Sarai’s plan to obtain the son God spoke of backfired. Hagar did not appreciate being used and treated Sarai with contempt. Sarai complained to her husband. This wasn’t Abram’s plan, and he did not want to be bothered. “You deal with it,” he said. Sarai had the power to make Hagar’s life a misery and she did. Hagar had enough of being used and abused. She fled, but had nowhere to go.

God knew his people acted badly and took pity on Hagar. He dispatched an angel to make right the wrongs committed by his people. The Angel delivered both good and bad news that gives us insight into God’s character.

The bad news first: “Go back to your mistress and submit to her.”[2] Running away from a problem seldom works. Hagar had been abused but confronting abuse with abuse by treating Sarai with contempt made Hagar no better than Sarai. She must return and reconcile with Sarai.

The good news: “I will increase your descendants so much that they will be too numerous to count.”[3] Then God compensated Hagar for the misery that had been inflicted upon her. He named her son Ishmael and said Ishmael would live in hostility toward all his brothers. Those who created misery in her life would also know misery. The numerous children of Ishmael became a thorn in the side of the numerous children of Isaac. That hostility continues to the present day.

God gave Hagar everything he gave Abram. Isaac’s son Jacob had twelve sons who became a great multitude. Ishmael had twelve sons who became a great multitude.[4]   God also gave Hagar and her children the promises he made Abram, because those promises never belonged exclusively to one family. Generations would elapse before the son God had in mind would enter the world. Hagar and her children could obtain the promises the same way Abram did. Through faith in the one seed we can inherit the promises from – Jesus.

[1] All scripture quotes are from the NIV Bible unless otherwise noted.

Teena Myers is the Chairman of Southern Christian Writers, a freelance writer and author of three books.
View all posts by Teena Myers →
This entry was posted in Follow Me and tagged Abram, Abused, Christian, follow me, God, Hagar, Ishmael, Jesus, promises, Sarai, servant Hagar, Teena Myers. Bookmark the permalink.