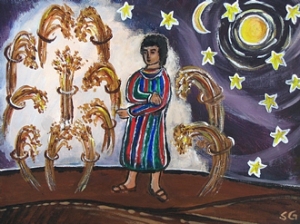 After Jacob kept his vow at Bethel, God stopped talking to Jacob and began talking to Joseph. Jacob knew God spoke through dreams. The first time God spoke to Jacob was through a dream. When Joseph dreamed of being exalted above his brothers the brothers hated him. His father remained silent.

Then Joseph dreamed of being exalted above his father, and Jacob rebuked him. A clear indication that Jacob did not understand the gospel Abraham taught him. To receive the things God promised, Abraham, Isaac and Jacob must bow to one of their son. We know that son is Jesus, but the patriarchs did not know which son they would inherit the promises from. Jacob did not know about Jesus, and he did not know when the son God made the promises to would be born. For all Jacob knew he was rebuking the Messiah. Joseph was not the Messiah, but God did use him to save the world from starvation.

God’s message and actions have remained consistent for three generations. He told Abraham his family would serve a nation that would afflict them, and God would judge that nation before he brought them out with great substance. That nation was Egypt, but the patriarchs did not know that. God gave Joseph dreams to prepare the way for their relocation to Egypt fulfilling the things he spoke and vowed he would do when Abraham believed him.

It may have appeared that Joseph’s dreams were vain imaginations to both Joseph and his family. His brothers sold him into slavery, and then lied to their father. Jacob lived many years believing Joseph was dead. I find it interesting that Jacob’s sons treated him the same way Jacob treated his father Isaac. And Jacob would lived with sorrow for many years before he learned God made his evil deeds work together for good.