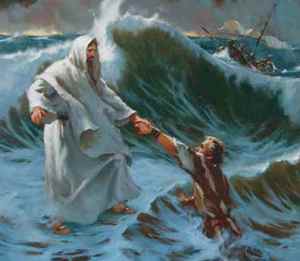 A Study in Jesus’ dealings with Simon, brother of Andrew, who became the Apostle Peter.

Simon, destine to become a rock in the kingdom of God, remained on Jesus’ list of things to do for months. His initial meeting with Simon took place prior to March A.D. 25. Shortly thereafter Jesus returned to Galilee. Someone invited Jesus and his disciples, at this point Philip and Nathanael[1], to a wedding where he turned water into wine. This miracle reinforced his disciple’s faith.[2] He made a brief stop in Capernaum and then returned to Judea.

Jesus kicked off his ministry confronting Israel’s racism. Israel’s law permitted buying and selling animals so people who traveled could purchase the things needed to worship God. Areas in the streets around the temple would have been adequate for this activity. But the religious elite profited from this business and did not want to be near the thousands of Gentiles who came to the Passover. They solved the problem by moving the businessmen into the court of the Gentiles. The barnyard smells and squabbling of the money changers made it impossible for the Gentiles to worship God because entering any other area of the temple carried a penalty of death. Instead of encouraging the Gentile’s to worship God they pushed them into the streets.[3] Until Jesus arrived to clean up the court of the Gentiles and rebuke the religious leaders for excluding them.

Jesus boldness and miracles won him many followers. Soon John the Baptist and Jesus’ disciples were both baptizing the repentant. As Jesus’ ministry grew John’s ministry withered and ended when Herod put him in prison. Jesus heard the Pharisees were aware of his success and knew their jealously would cause trouble so he left. On his way back to Galilee, he once again took a hammer to the wall of racism. He spoke to a woman of ill repute when he stopped to rest at Jacob’s well and then spent time with half-breed Samaritans. Good Jews considered both unclean. [4]

Jesus fame preceded him to Galilee. Everyone was talking about the things he did at Jerusalem during the Passover. People came from other cities seeking his help for sick loved ones.[5] In the wake of his success the synagogue Jesus grew up in invited him to preach. He amazed them with his gracious message until his graciousness included the Gentiles. Then they tried to kill him. Jesus responded by moving his ministry headquarters to Capernaum fulfilling Isaiah’s prophecy: “The land of Zabulon and the land of Nephthalim by the way of the sea, beyond Jordan, Galilee of the Gentiles….” would see a great light. [6]

A growing ministry needed more staff. The time had come to say “follow me” again. Matthew, Mark and Luke record the call of “Simon called Peter”[7]. Matthew and Mark leave the impression Jesus walked along the seashore, saw Simon, promised to make Simon a fisher of men and Simon walked off the job to follow a man without good reason.

But there is more to the story. Luke gave us the more we need to put Simon’s decision to follow Jesus into perspective.  Jesus often taught outdoors to accommodate the large crowds that could not fit in a synagogue. On the day Jesus called Simon the crowds were “pressing upon him to hear the word of God.”[8] Jesus needed a platform and a way to amplify his voice.

He discerned the solution when he saw Simon the fisherman sitting on the shore washing his nets. Jesus and Simon were already acquainted having met during the height of John the Baptist ministry. When Jesus moved his ministry to Capernaum it’s possible Simon attended some of Jesus services, but he was not following Jesus with the crowds.

There is no way Simon could have missed the large crowd of people moving in his direction or the fact that Jesus emerged from the crowd and stood in his boat. Simon pushed his boat from the shore giving Jesus a barrier between him and the crowds. The water amplified Jesus’ voice making it easier for the crowd to hear.

At the conclusion of Jesus’ message he made an unusual request. “Put out into deep water, and let down the nets for a catch.”[9] Simon, the professional fisherman, had been up all night trying to catch fish gathered along the shore to feed. His labors produced nothing. The fish were now hiding under rocks. His nets were clean. Simon was exhausted and ready to go home.

It is difficult to know Simon’s frame of mind. Did he respect Jesus or did he have his own interest at heart? Jesus is famous with a large group of fans observing them. If he did as Jesus requested, he might look foolish. If he blew Jesus off his disciples might not appreciate it and stop buying from his fishing business. If he did as Jesus requested, Jesus might look foolish when the nets came up empty, but that would be Jesus’ fault not his. Simon shifted the expected negative results to Jesus’ shoulders when he said, “Master, we have toiled all night and caught nothing; nevertheless, at your word I will let down the net.”[10]

Simon summoned Andrew and headed for deep water. His business partners, James and John stood on shore wondering if Simon had lost his mind. Simon cast his net and pulled in a so many fish his boat sank from the weight. There is a hungry crowd onshore, and each fish represented a sale. He beckoned his fishing partners, James and John, for help. Two boats were insufficient to hold the fish they caught. They were astonished.

In the midst of winning the proverbial fishing lottery, Simon said to Jesus “Go away from me, I am a sinful man.”[11] Simon announced what Jesus already knew, and Jesus knew what Simon did not know. “…the goodness of God leads you to repentance?”[12] Jesus trusted a sinful man to assist him as he ministered to the crowds and then paid him infinitely more than his help deserved. That act of kindness brought Simon to repentance.

Jesus ignored Simon’s request to “go away”. Instead, he offered a man who recognized his sinfulness a place in his fishing business. He said to Simon, Andrew, James and John, “Follow me, and I will make you fishers of men.”[13]

The fishermen walked away from their business leaving Zebedee, the father of James and John, to fend for himself. But Zebedee did not have to worry. Jesus knew the devastating affect the unexpected loss of four employees could have. The catch of fish sold to the crowd waiting on the shore that day would have made Zebedee enough money to keep the business operating until he could find new partners.

[1] Andrew and Simon may have been disciples but had not been called to “Follow” yet. Whether or not they were in attendance is debatable.